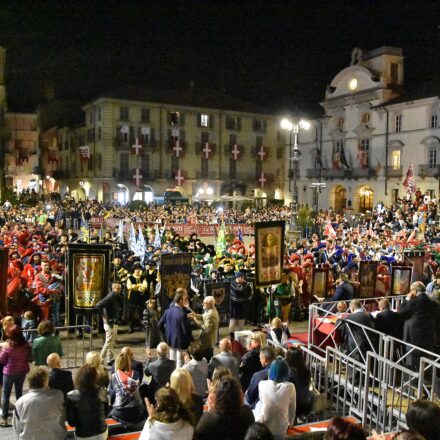 The Rites of May

The Palio year begins with the Patronal Festivals.
On Saturday night, after a sumptuous historical procession, the ceremony of the Appraisal (Stima) takes place according to the ancient rites: At the disposal of the Mayor, three expert drape merchants verify that the drapes of the Palio, one for the winner of the race and the other for the Church of the Patron Saint, “…are as good and of the same size and quality as usual…”.

The Palio is the work, every year, of a master of contemporary art. At the end, we have the Oath of the Rectors of each district, hamlet, and municipality and, finally, the most expected moment: The Mayor, to the jubilation of an entire city, solemnly announces the Palio that will be held in September.

On Monday evening, the fireworks. On the day of Saint Secundus, the first Tuesday of May, the offer of the drape in homage to the patron saint. The distribution of the Soup of the Poor follows. Finally, on Wednesday, the traditional fair: Over three hundred mercatores with their stalls color the historic center of Asti.

The Palio of Flag Wavers

In Asti, the groups of musicians and flag-wavers, representing the twenty-one districts, hamlets, and municipalities participating in the Palio, compete in a vibrant and exciting tournament called Palio degli Sbandieratori (Palio of the Wavers).

In the heart of the city, on the square facing the Collegiate Church of Saint Secundus, under the watchful eye of the judges of the Italian Flag-waving Federation, the teams perform difficult and extraordinary evolutions.

Spectacular choreography and fast-paced rhythms in a flash of festive and colorful flags: A race, which precedes the Palio and anticipates its emotions between the blare of trumpets and the roll of drums.

To the winners, a drape similar to the Palio for the race, but of reduced dimensions, for this reason the event is called Paliotto.

The History
The winner's Drape
The timetable of Palio

The words of Asti

Stay up to date on Asti events